There was a time when we were both living in Detroit that I saw Dimi practically every day. Our lives are different now, not necessarily more complicated, just different. Schedules don’t give as easily and our increased mobility constrains as much as it frees. Although Dimi has been back from Gabon, West Africa, since early October, last night was the first time I had seen him since the summer. Approaching the gathering crowd outside of IFC on 6th Avenue, I heard Dimi before I saw him. His scratchy, urgent voice is unmistakable. Some people make you feel as if you are home every time you see them, no matter how much time has passed. Dimi always gives the best homecomings.

His mother, Katie, flew in from Detroit to see her youngest son’s debut. Katie, at 82,  is just as radical and lawless as her son. I came to know her shortly after I met Dimi when she facilitated a series of drawing and ceramic classes in the shelter for young women I was directing. The residents kept asking for her months after she left. Last night I asked her if she was nervous about seeing Dimi on screen, his work exposed in front of a packed house. She told me she had no such concerns since she had seen several previous versions and already leveled her critical analysis. This final version, she assured me, was right on.

The film follows Dimi as he administers ibogaine (a substance derived from the iboga plant found in West Africa and used by the Bwiti for ritual and medicinal purposes) to individuals who want to live addiction free. Heroin, cocaine, various benzoids, and methadone are just some of the substances controlling the lives of the people who go through the ibogaine treatment in the film. The audience witnesses the entire process from the time the individual expresses the desire to begin recovery through their physical and spiritual two-three day journey through ibogaine, to their arrival on the other side. The other side can often mean being addiction free but it might also mean having a long hidden truth about oneself revealed, a deep wound healed, a pathway exposed where no roads were thought to exist. In other words, change, true change, looks different on everyone and can’t always be measured by the limits of our western understanding of outcomes and success stories. But, nonetheless, many of those who do use ibogaine, like Dimi, are so profoundly transformed that their substance addiction can’t help but be a part of this change.

Part of the narrative arc Negroponte creates in the documentary through Dimi’s bio occurs in following the change in the way Dimi thinks about the purpose of his work and his self-identified role as healer. In the beginning of the film, Dimi speaks about his work with an almost radical arrogance. He admits being drawn to the “delicious” riskiness of the underground network ibogaine requires as well as the chaos of the unknown that comes with each treatment. His high speed speech and infectious electric energy propel the film at this point. I had the sense that each dose of ibogaine Dimi prepared carried a promise — a covenant that I hoped would be kept for Dimi’s sake as much as for the addict’s.

During the treatment of two heavily addicted brothers in Canada, the audience watches one treatment go horrifyingly wrong. The two brothers are addicted to heroine, methadone and a cocktail of benzoids and are still using in large doses just hours prior to meeting up with Dimi. They seem too precarious to help, even to my untrained eye. As I  listened to them talk about their addiction, I wondered when Dimi would call off the treatment and make the decision that the risk was too great. Even though throughout this scene, I felt impending doom, Dimi’s combination of comfort and cockiness made me forget that someone’s life could be on the line until one of the brothers stops breathing and goes into what looks like cardiac arrest.

It took me up until this  climatic moment in the documentary to realize that I heard this story before. Years ago on the phone with me a few days after the incident in Canada, Dimi’s voice sounded defeated, shamed and for the first time afraid. On the screen last night, the scene was more terrifying visually than I remember hearing.  I knew the young man survived but the divide between the film and off screen is too great. I temporarily suspend my own knowledge. I wonder if he will live. I wonder if Dimi will learn a lesson. I wonder what lesson I want him to learn. I wonder if in reality, when I actually found out about this near death experience, I was a good friend to Dimi – if I responded in the right way. This intense scene is the pivotal event in I’m Dangerous With Love.  After this, Dimi contemplates the egoism that he believes may be guiding his work, and the difference between assisting folks with humility and the assumption, through arrogance, that he is saving people. Listening to Dimi work through this internal conflict, it becomes clear that his arrogance, passion, and addiction to risk and chaos is all actualized with love…however dangerous.

But, love is not enough. Even though, for me, the most moving aspect of watching Dimi on screen is being witness to the ways in which he offers love so openly and indiscriminately to everyone with whom he interacts.

But, this way of loving can be dangerous. I know.

Dimi returns to Gabon to gain clarity and realign with the ceremonial context that supports iboga’s healing properties. It is here that we are reminded that addiction and sickness, healing and well being, love and acceptance are always rooted in community. Our ills and the things that heal us happen against, through, because and in spite of community. We don’t just need one another. We need to be better to one other. This starts by acknowledging that there are no less thans, undesirables, underclasses, degenerates, peripheral folks. We are all at the center. This means recognizing that we all will pass through sickness and health – will be ill or provide healing. This awareness of our mutually constituting lives includes love but requires actions that don’t always look loving but, in fact, may seem extreme, aggressive, harsh, risky, even dangerous. 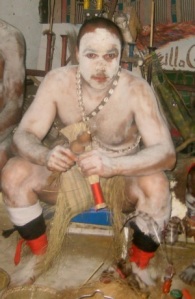 Some folks work very hard to make it difficult, nearly impossible, for you to find a way in to loving them. Whether they are strangers or folks you consider family, their acts on purpose or unintentional…find a way in anyway. The only dangerous love is that which is not given. This is the greatest lesson I’ve learned through my nearly decade-long friendship with Dimi.

My name appears in the credits. I forgot to ask Dimi what I did to deserve to be there.

p.s. I realize it may be considered naive or trite to talk about love, but where else do we begin? If you know of a better starting place, let me know.

12 responses to “I’m Dangerous Without Love”